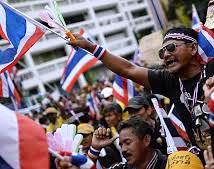 For eight weeks anti-government protestors have been rioting in the streets of Bangkok in an attempt to prevent a new election in Thailand, threatening Southeast Asia’s second largest economy and stability. The rioters have prevented candidates from registering for the national election that is scheduled for February 2. This standoff is causing great uncertainty in the country. The stock market is down over 8.0 %. The Thai Baht is at a three year low against the Dollar, the economic growth forecast has fallen over 1.0% and tourism, Thailand’s major economic contributor, is down dramatically. Over 40 countries have issued travel advisories and airlines have cut flights to Thailand by 40%.

In a world that is becoming more politically toxic this type of news is not unusual.  Traffic is tied up, 100,000 people clog the streets, government buildings are occupied by protestors and a military coup is always possible in this part of the world.  The opposing sides have taken to the streets with the usual weapons: guns, rocks, tear gas, Molotov cocktails, burning tires, etc.  Nothing out of the ordinary.

But this is Thailand and there are other weapons in use in this uprising that are unique to Southeast Asia.  Thais are among the most spiritual people on the planet.  Over 98% of the population is Buddhist.  But Thai religious beliefs go back millennia to the animistic times before the birth of the Buddha in about 500 BC.  Thai Buddhism accepted the belief in spirits and ghosts as the animists were converted.  So the Spirit World is a powerful factor in Thai life.

Both sides believe the other is calling on Spirits to cast spells on the enemy, employing sorcery and turning to black magic.  Combatants employ astrologers, fortunetellers and mystics.  To counteract these attacks Thais have turned to an ancient weapon, amulets, for protection.

Amulets are objects that are alleged to protect the wearer from harm.  They have been used for a long time by many people.  The word comes from Latin, amuletum, or “an object that protects a person from trouble” according to Pliny the Elder (23 AD – 79 AD).  An amulet may be a carved gemstone, coin, ring, pendent or take other forms.

Most Thais wear multiple amulets and own numerous others.  (Collecting amulets is a national hobby.)  This is not considered animistic but rather a cultural tradition.  They chose to wear an odd number as that is considered to insure more complete protection.  Amulets must be made by a highly revered teacher or Buddhist monk.

Recently a western journalist interviewed a protestor.  Kittchai Saisa-ard said “If our enemies are using black magic, we must wear our amulets to counteract it.”  He said he believed they would even protect him from bullets.