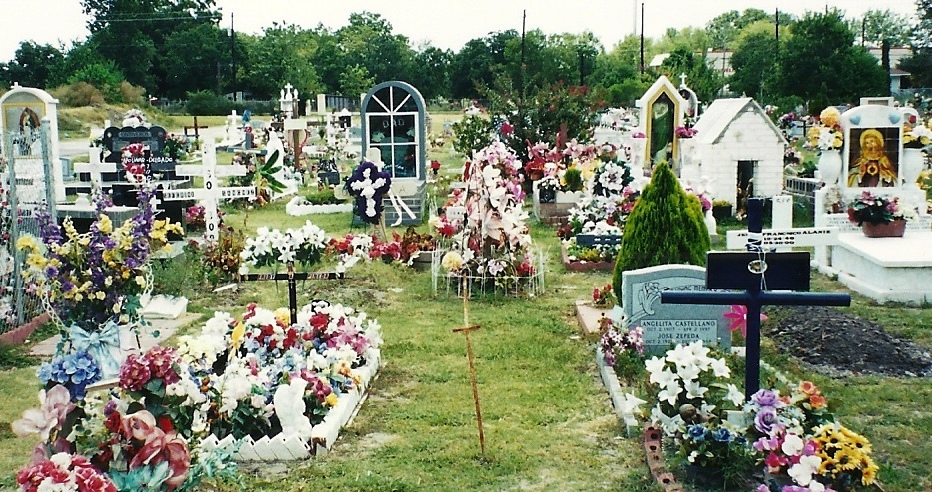 For certain is death for the born

And certain is birth for the dead;

Therefore over the inevitable

Thou shouldst not mourn.”

Originally Felix Morales purchased this once rural plot of land to use as a ranch.  However, as he had opened a funeral home on the east side of Houston in 1931, he eventually saw the property as a natural extension of his business.  In addition it was difficult for Hispanics to be buried in Caucasian cemeteries because of segregation.  So Morales elected to open a burial ground for the Hispanic community.  (An oddly know fact is that the first interment was a homeless Oriental male.)

Most of the individuals buried here are of modest means and cannot afford the lavish mausoleums or tombstones seen elsewhere in the city’s graveyards.  Many of the tombstones are handmade by family members. Morales is one of the most colorful burying grounds in Houston.

The attraction to visiting Morales is not the notable people who are spending eternity here but the fabulous folk art memorials that many families create in memory of their dearly departed.  A trip here is especially rewarding during El Dio de los Muertos (Day of the Dead) when family members are cleaning the graves, decorating them and lighting candles.

Morales, Felix Hessbrook – (1907-1988) – Funeral Director – Born in New Braunfels, Texas, he first moved to San Antonio where his entrepreneurial spirit awoke.  Morales shined shoes and sold newspapers, worked construction, worked in a funeral home and operated a taxi service.  In 1951 he sold his taxies, borrowed $150 from his brother, moved to Houston and opened Morales Funeral Home.  Morales opened one of the first Hispanic radio station, KLVL-AM, known as “La Voz Latina” (Latin Voice).  The station broadcast news and music but the daily radionovelas (soap operas) were wildly popular.  Among Morales other accomplishments were:  a founding member of the League of United Latin American Citizens (LULAC); a board member of Union y Progreso Barrio Development of Houston and was recognized by the Houston Press Outstanding Hunter Award in 1959 (At that time, the Houston Press was the city’s daily afternoon newspaper. It has no connection to the weekly Houston Press of the 21st century).  A Pasadena elementary school was named in his honor in 1991.