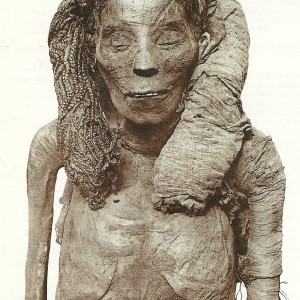 As members of the National Geographic Society and readers of the magazine, we came across the following article we thought might be of interest to you.

In ancient Egypt styled tresses were complex expressions of identify. Male and female, young and old, noble and peasant chose among curls, waves, twists, braids, extensions, wigs, razor cuts, and dye jobs according to their position in society, religious canons, and personal preference. These indicators of style and status were equally important in the afterlife, and the hair of the dead was arranged with just as much care. A recent study of 18 mummies at the University of Manchester revealed that most had hair coated with a fatty substance – perhaps applied after mummification, like modern styling gel, to prepare a postmortem hairdo. Further testing promises to reveal the makeup of this mysterious product with permanent holding power. – A. R. Williams