“When good men die their goodness does not perish,
But lives on though they are gone.  As for the bad,
All that was theirs dies and is buried with them.”
-Temenidae 734
Euripides

Located on Fourviere Hill in the western part of Lyon, Cemetery of Loyasse is referred to by the locals as the “rich cemetery.”  It is filled with beautiful funerary art, chapels, mausoleums and sculpture.

Not far to the east of the main gate is the Basilica of Notre Dame de Fourviere.  It is dedicated to the Virgin Mary who the faithful believe saved Lyon from a cholera epidemic (1643) and repelled the invading Prussian forces that were advancing on the city (1870-1).  This Romanesque and Byzantine place of worship was designed by Pierre Bossan (buried here) and erected between 1873 and 1884.

A path leads from the main doors of the Basilica to the gate of Cemetery of Loyasse.  It is used for funeral processions during rites of burial.

Many famous Lyonnais are interred here including: 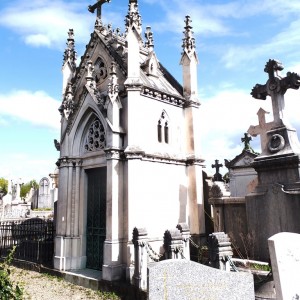 One thought on “Cemetery of Loyasse, Lyon, France”