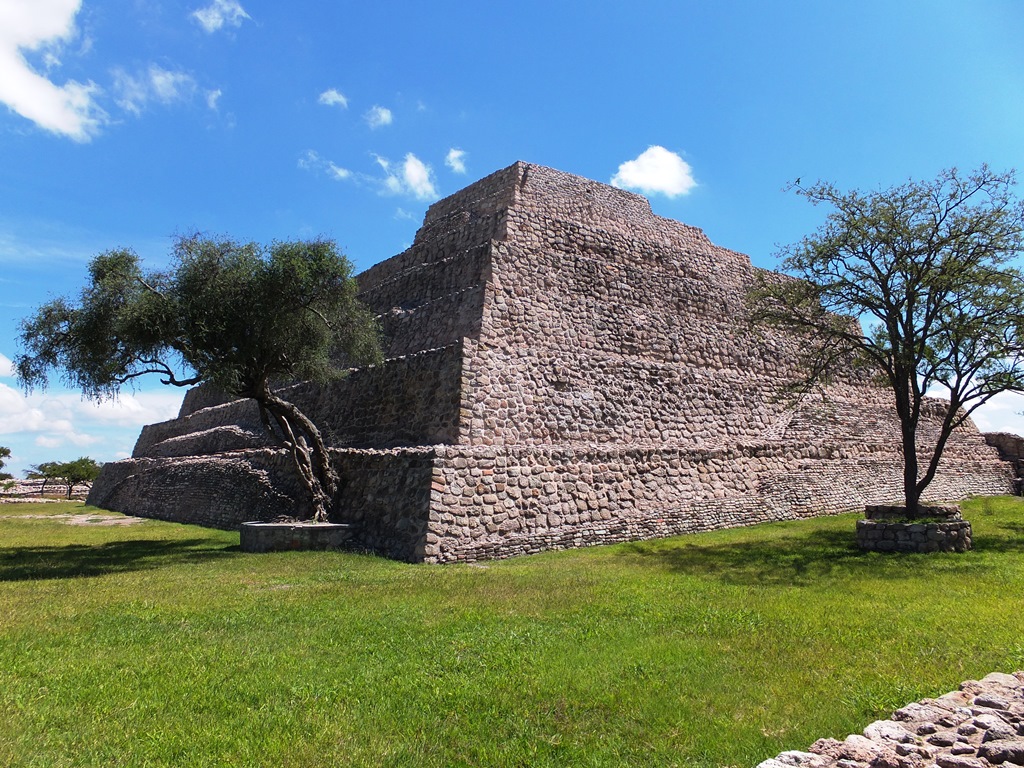 In the central basin of the Laja River Valley near the colonial Mexican town of San Miguel de Allende, is the Cañada de la Virgen (the Canyon of the Virgin) archaeological site.  Locally it is referred to as “a refuge of the dead and the ancestors.”  La Cañada is the northernmost Meso-American architectural site ever found and the most recent to be excavated.  (Archaeologists know of 118 additional unexcavated sites nearby.)  The discovery was made in 1998 and the official excavation began in 2002. The public has been allowed to visit since 2011.  However, unlike other famous ruins like Chichen Itza or Teotihuacan, access is strictly controlled. 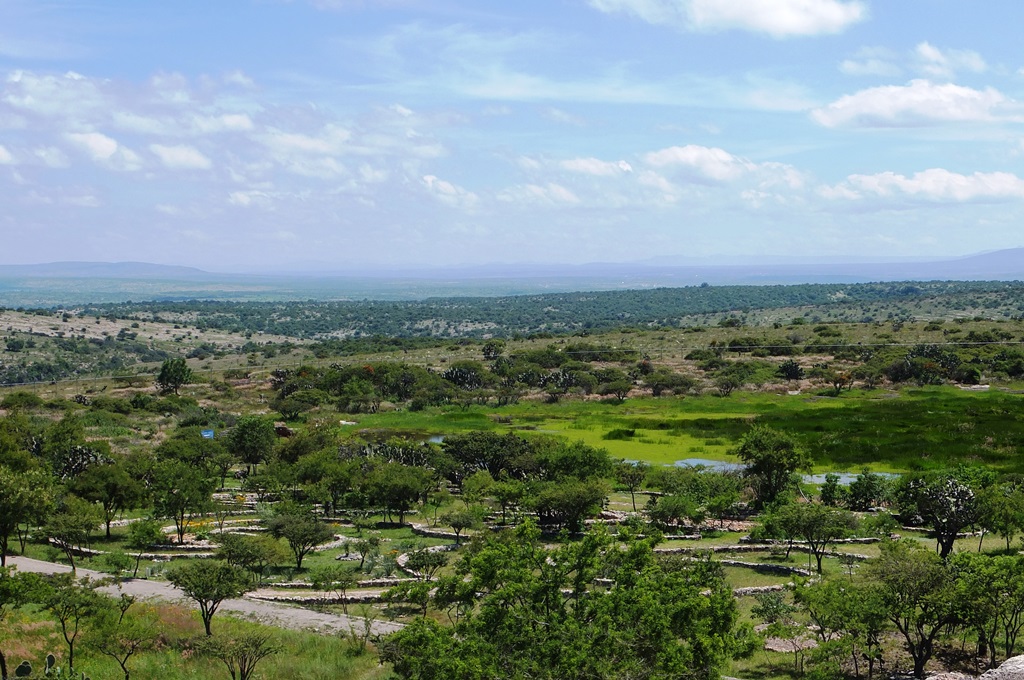 Garden & Sacred Pool in foreground of the photo

The Otomi Indians have lived in this valley for thousands of years.  Construction at Cañada most likely began after the collapse of the Teotihuacan Empire in the Valley of Mexico (near Mexico City today) around 530 AD.  The Otomi were avid sky watchers and passed this information down from generation to generation.  These people used astronomical criteria, religious beliefs and agricultural cycles in selecting the Laja River Valley for the construction of this complex. 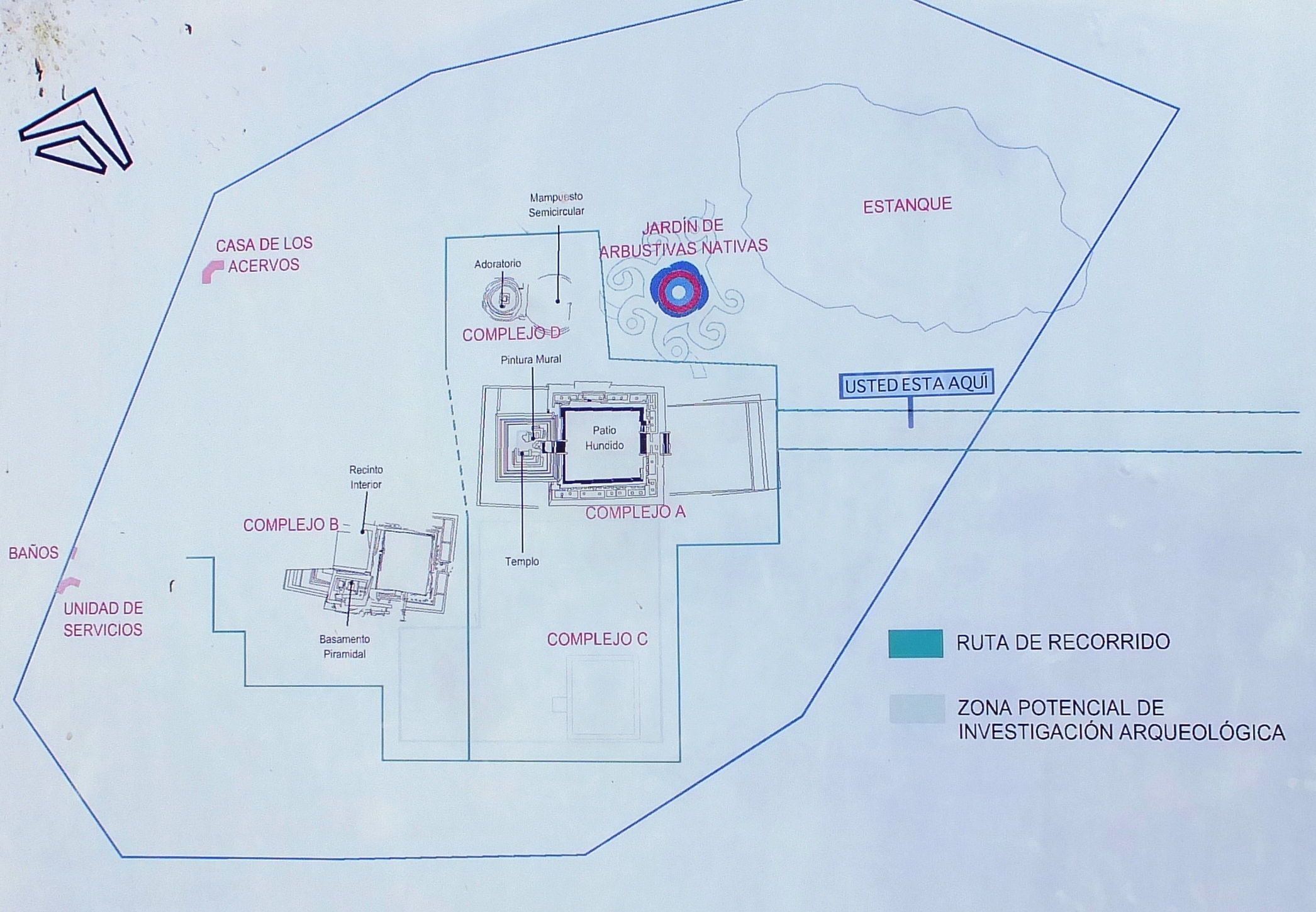 Cañada was laid out on an east-west axis that was guided by the setting of the Sun and Moon, behind the Pyramid.  The reason for this orientation was their religious and agricultural celebrations were linked with the Sun’s position on the equinoxes, solstices and at its zenith.  Around 540 AD the first of three construction phases began.  (Over the centuries each new phase was laid on top of the earlier one.)  During the Classic Period (600-900 AD) of the Otomi civilization, Cañada would have been a landscape of sanctity and a ritual ceremonial center that represented a position of authority in its region.

Let’s take a short tour of the site before examining the startling burials discovered here. 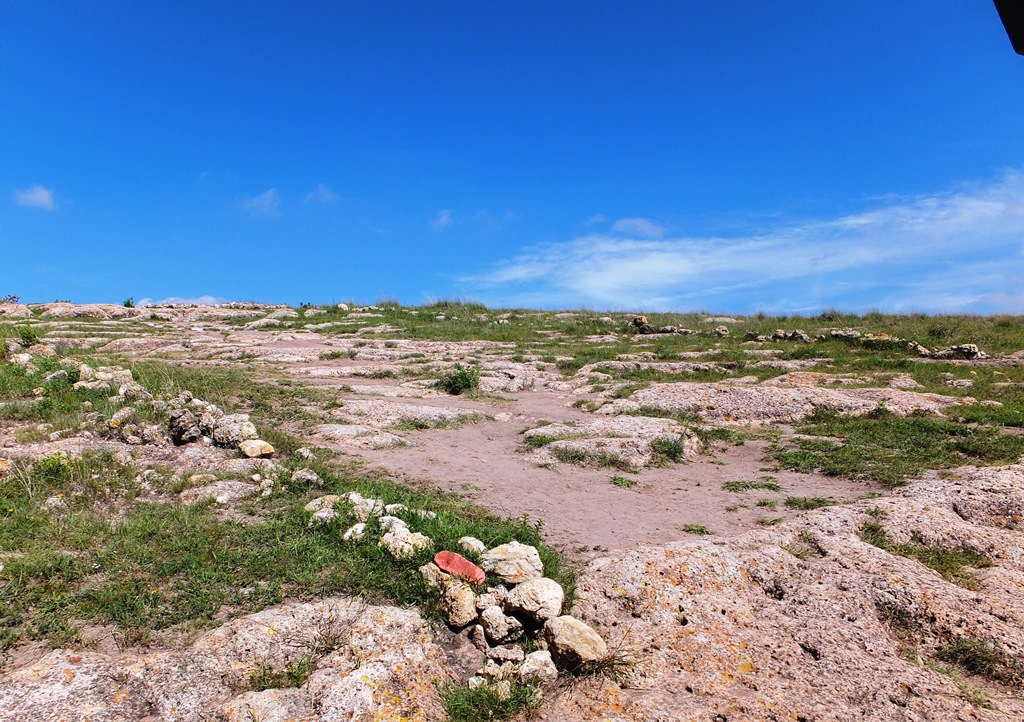 From the Valley floor we follow a Ceremonial Avenue up and west that leads to the main Pyramid.  The road is about 18 yards wide and over a half mile long.

As we get our first view of the main Pyramid we will enter a Sun shaped garden with plants the Otomi used for food, medicine and rituals.  It contains thousands of pottery shards.  Below the garden is a Sacred Pool that collected water in the rainy season to be used in drier months. (See the 2nd photograph above for an overview of the gardens and pool.)

House of the Winds

Our next site is a circular stone structure called the House of the Winds.  Archaeologists believe it played a major role in ancestor worship and ritual sacrifice.  Here an abundance of “killed ceramics” was found.  As part the sacrifice, priests shattered or “killed” white ceramic pottery as a symbol of elimination of the victim. 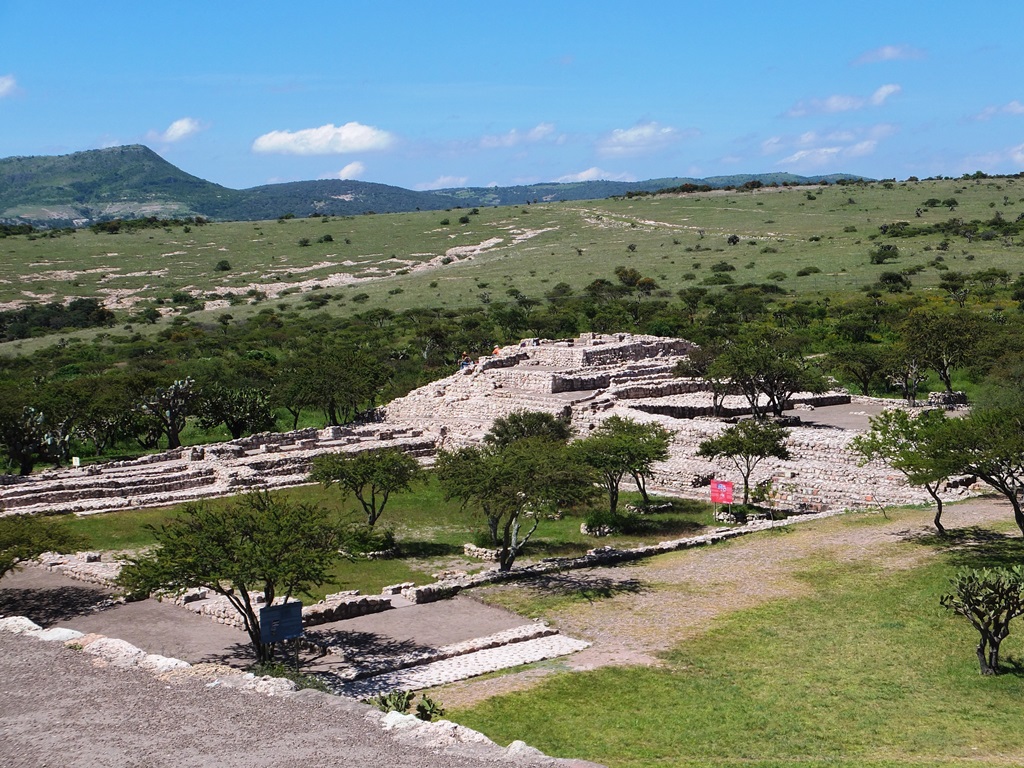 House of the Longest Night

Next we visit the House of the Longest Night. It is a smaller pyramidal structure with a sunken patio that scientists believe has some relationship with the Otomi’s belief in duality of the heavens and earth (Sun and Moon, Man and Woman, etc.).  It was in this complex that one of our mysterious burials was discovered. 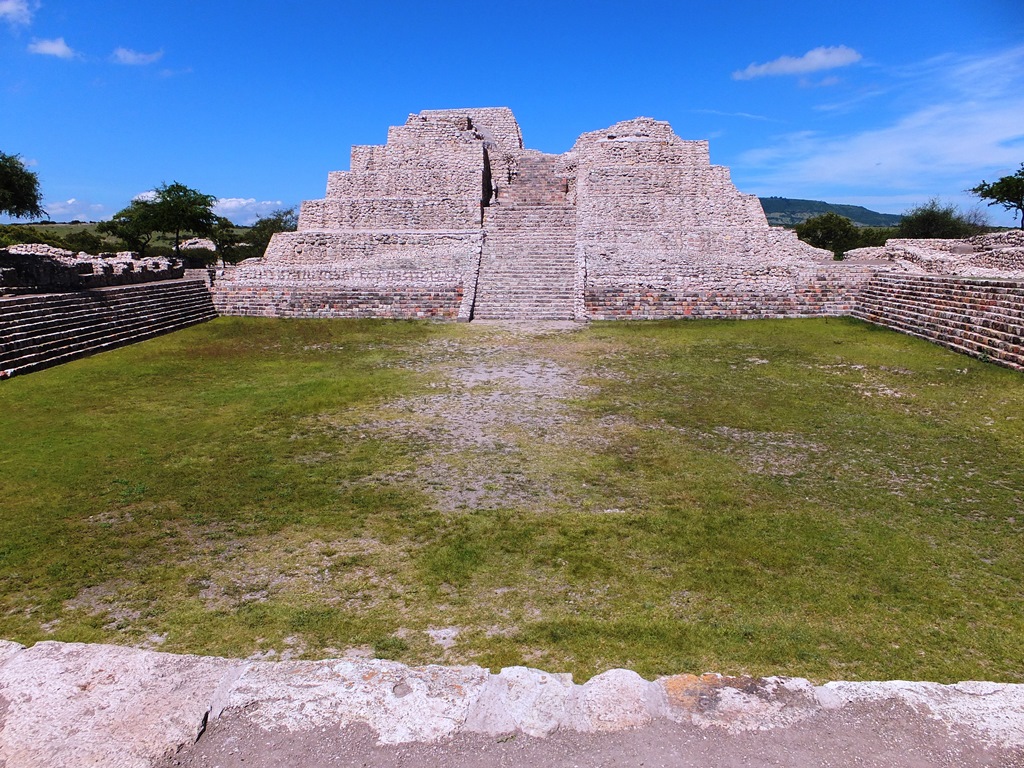 Our final stop will be at the House of the Thirteen Heavens, the most important monumental structure of the ceremonial center as it was the point of observation of celestial phenomena. Please take a look at the photographs of the Sun, Moon and Jupiter (visible just above the Moon) setting behind the top of the pyramid.  The complex consists of a large pyramidal base topped with a structure known as the Red Temple, a sunken patio and three platforms containing small rooms of unknown use.  It is in the Red Temple that our second amazing burial was found. 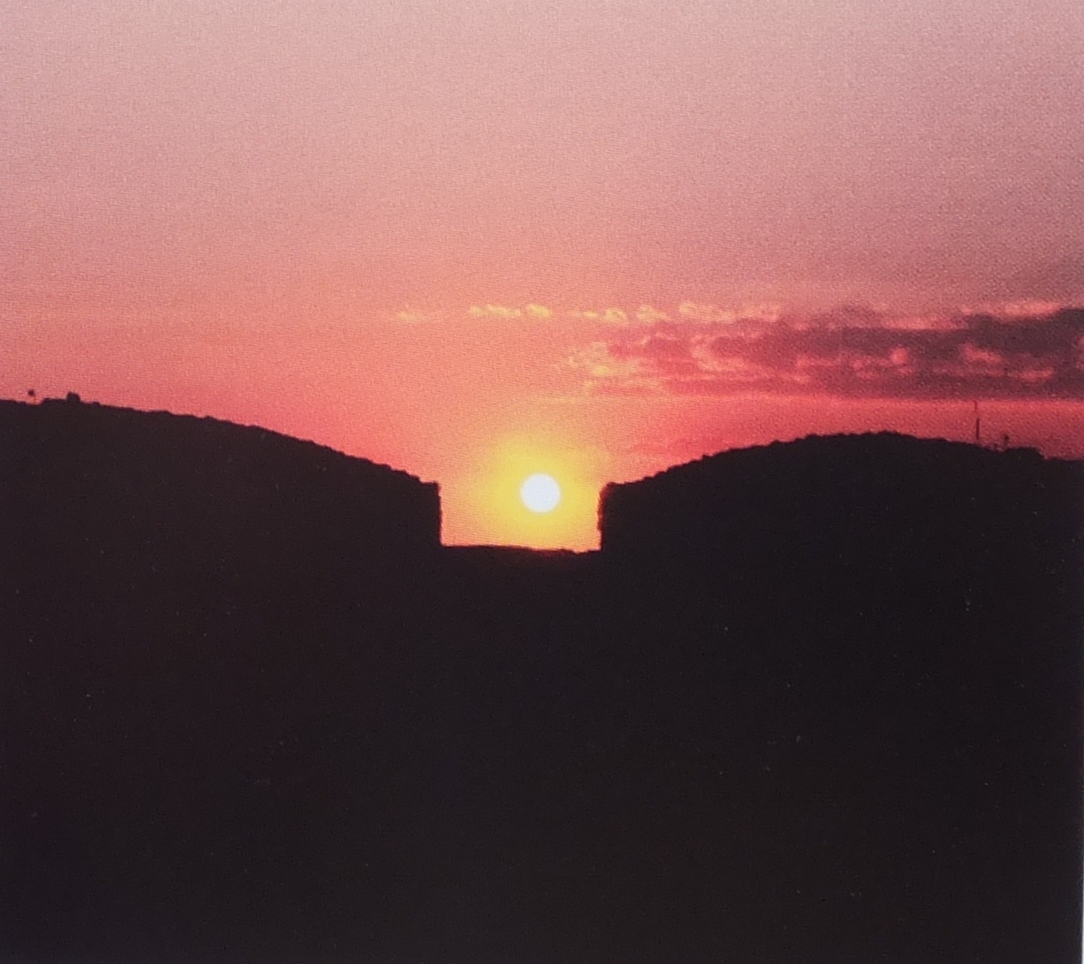 Sunset behind House of Thirteen Heavens

At the House of the Longest Night, at one of the important cardinal points, archaeologists unearthed the remains of a young person (7-11 years of age), interred as a warrior.  The grave contained an obsidian knife and ax as well as remnants of a warrior’s clothing.  Also found were the bodies of four infants, a sign that the person was considered divine.  Initially, all concerned assumed the body was that of a young male.  However, after sending bones to a laboratory in Mexico City, the archaeologists received a huge surprise – the remains were that of a young woman.  Never before had a female warrior’s tomb been discovered in Meso-America.  That wasn’t all.  The bone scan revealed not only her sex but also that she had been dead for more than a thousand years prior to her interment at Cañada.  It was also discovered she had been mummified and placed in a cloth funerary bag fitted with loops for transporting her.  La Niña Guerrera (Little Girl Warrior), as she was named, had been passed down for generations as an object of adoration as a revered ancestor.  This was also never before discovered.

Moving to the House of the Thirteen Heavens, let’s visit the Red Temple atop the pyramid.  It is given that name because the interior contains an abstract mural consisting of various shades of red as well as alternating bands of black, ochre and white representing levels of the cosmos.  In one corner of the temple in 2006, archaeologists discovered an undisturbed tomb about four feet below floor level.  In it they found the grave of a divine ruler. 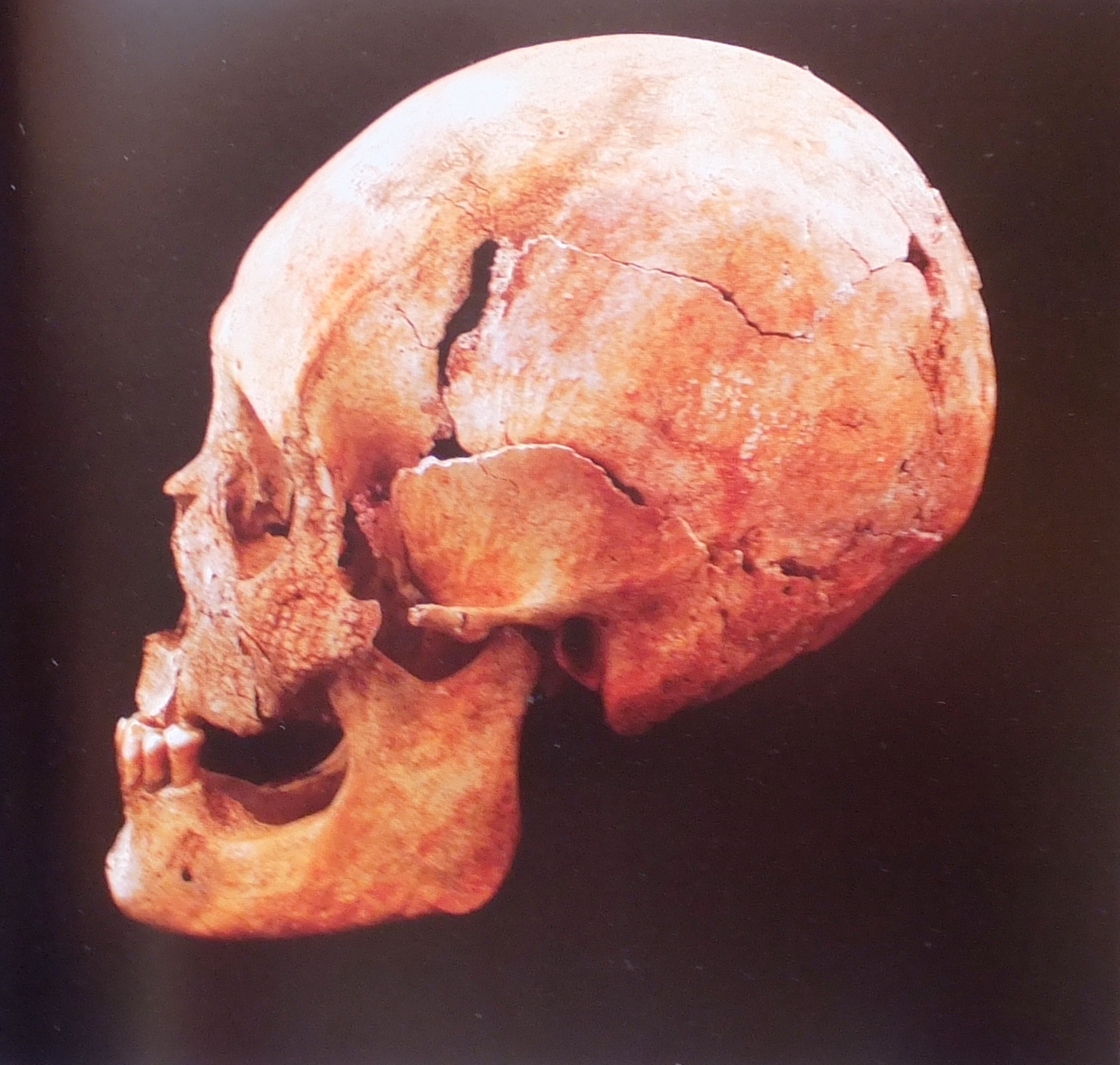 Studies of his remains show a broken jaw and rib and a deadly ax wound to the head.  Bone scans indicated his age at the time of death to be 52 years.  The number 52 is sacred to the Otomi as that marks the end of an important cycle.  Based on this information archaeologists believe he may have been the victim of a ritual sacrifice.  In addition his legs had been amputated below the knee.  The possible reason for this is that his feet would have been left in his home territory so his spirit could find its way home. So he had not been sacrificed at Cañada, only reinterred there. 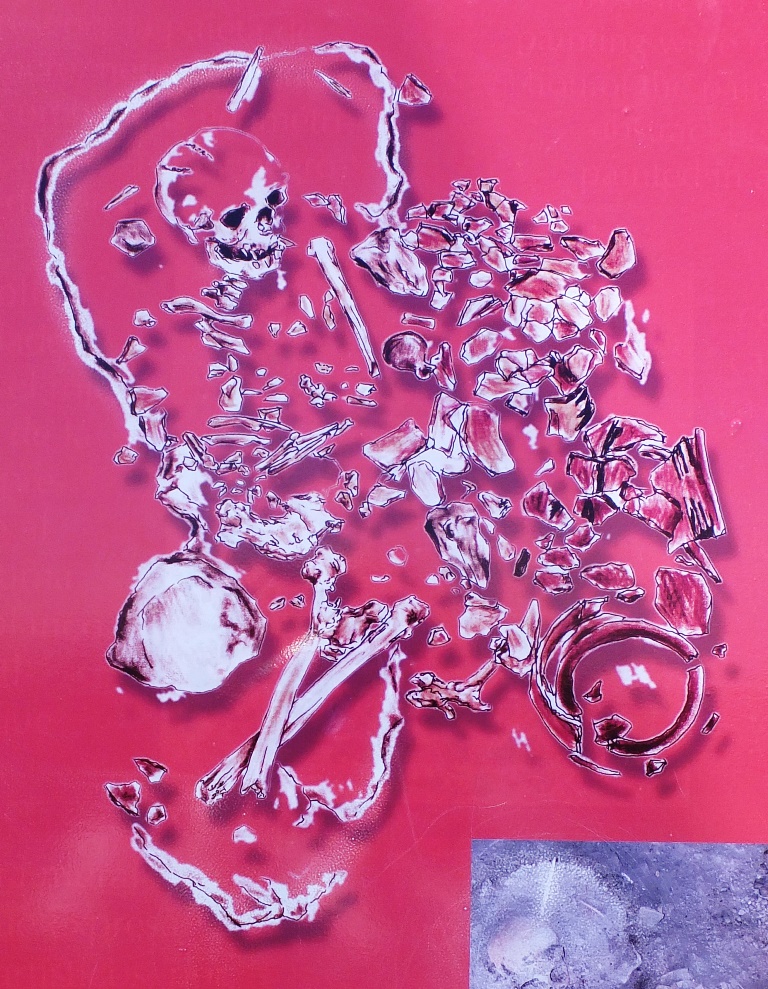 Buried with him were a dog, 22 “killed” white and red pottery pieces, bracelets, necklaces and a mother of pearl chest pendent.  And similar to the Little Girl Warrior, he was wrapped in a finely woven mat and placed in a frame made of wooded rods that held his funerary bundle.  Further studies showed he also had been mummified more than a 1000 years previously and worshiped by generations of Otomi. Thus he was named el Jerarca or the Hierarch.

Around 900 AD, the Otomi civilization began to decline and by 1050 AD, Cañada was abandoned, only to be rediscovered at the end of the 20th century. Work and research continues and we highly recommend a visit if you are in the region. LSU graduate of archaeology Albert Coffee has an encyclopedic knowledge of the area, the significance of the site, the Otomi civilization and the archeological work done, in part because he participated in field work for several years. You may contact him at 044-415-102-5583 or acoffee@live.com.mx. His excursions leave from San Miguel de Allende several times a week. You will be informed and entertained from the minute he pulls away from centro San Miguel. Please keep in mind: you need to be capable of walking a fair distance and negotiating steep uneven steps.

One thought on “The Most Unusual Burials in the Western Hemisphere”