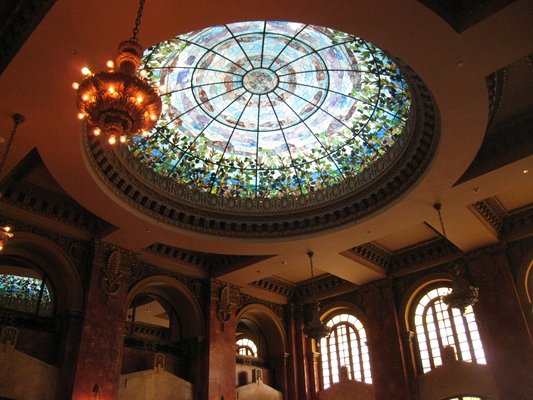 A few years ago we were visiting El Paso to take in the sights of this historic West Texas town.  We decided to splurge and stay at the El Camino Real Hotel, a National Historical Landmark.  The architectural firm of Trost & Trost designed this magnificent structure for local businessman Zach T. White.  It was built for a cost of $1.5 million.  One of the Camino Real’s grandest features is its 25-foot in diameter Tiffany Dome suspended two stories over the lobby bar.  Its grand opening was Thanksgiving Day 1912.  During the Mexican Revolution (1910-20) guests would have a cocktail on the roof terrace garden and watch Poncho Villa and his army battle the Mexican Army in the border town of Cuidad Juarez across the Rio Grande River.  Little did we know what awaited us the next morning.

Upon exiting the hotel we noticed an interesting store across the street, Dave’s Pawn Shop (216 S. El Paso St.).  The windows were chock-a-block with what appeared to be interesting items such as a lion head, ivory carvings, cap-and-ball pistols, oriental statuary, etc.  However, when we reached the place, what did we see in a small glass box, none other than – Poncho Villa’s trigger finger!  It was for sale for $9,500.

So how did this all occur?  In 1923 Villa was assassinated near his ranch in Parral, Mexico by his political enemies.  He was buried in Parral.  Then the story gets mysterious.  In 1926 someone dug up his coffin and cut off his head.  Is it possible that his trigger finger was amputated at the same time?  In 2010 David Delgadillo, owner of the pawn shop, said a collector who claimed to own the skull of Villa paid him a visit to inquire about purchasing the trigger finger.  As Delgadillo was unable to prove his certificate of authenticity was genuine the buyer must have gotten cold feet.  There is also a rumor that Poncho’s missing skull is in the hands of Yale University’s Skull & Bones Club.  Thickening the plot are cemeteries in Chihuahua and Mexico City that claim the bandito is entombed in them.  Villa’s biographer says no one knows where the head is.

And finally, Mark Frierson, a sculptor of circus sideshow art, claims he created the realistic finger and issued it with a certificate of authenticity.  He says he has made between 25 and 50 of the fake fingers.  Frierson gave one of them to Willie Nelson.

In the end we will probably never know the true story.  But we enjoyed our visit to Dave’s Pawn Shop and photographing the relic.