One of our favorite authors is Edgar Allen Poe.  He was a master of Gothic fiction.  Among his more famous works are The Raven, Fall of the House of Usher, The Pit and the Pendulum, The Cask of Amontillado and The Black Cat to mention a few.

We especially enjoy reading his possibly autobiographical The Masque of the Red Death (1842). This tale occurs in the Middle Ages when Europe was ravaged by a series of plagues.  The main character is the “happy, dauntless and sagacious” Prince Prospero who along with 1000 other noblemen and women have taken refuge in his sealed abbey, hoping to save themselves from the deadly Red Death.  Although the disease is fictitious, the name might have been inspired by tuberculosis which killed Poe’s mother, foster mother and brother.  It might also have been chosen because of an epidemic of Cholera that raged through Baltimore (Poe’s hometown) in1831.  Other critics think the pandemic of Bubonic Plague is the culprit. 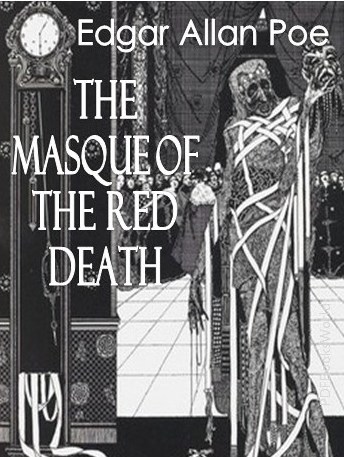 A quick plot summery goes like this.  One night Prospero decides to offer up a masquerade ball to entertain his guest in seven colored rooms.  The first six are decorated in blue, purple, green, orange, white and violet.  The seventh room is a chilling black which few of the attendees will go into.  A large ebony clock in the room chimes ominously on the hour.  When the clock rings midnight the revelers and Prospero notice a strange visitor in a dark and bloody wrap similar to a funeral shroud with a corpse like face has mysteriously joined them.  An outraged Prospero demands to know who the unwanted guest is and armed with a dagger chases the specter into the seventh room.  The intruder turns around to face Prospero who lets out a scream and falls dead.  The horrified revelers charge into the black space tearing off the intruders shroud and mask only to find nothing underneath.  They realize the figure is Red Death and everyone contracts the disease and drops dead.  The final sentence in the story is…”And Darkness and Decay and the Red Death held illimitable dominion over all.”

The story was published in Graham’s Magazine.  For his efforts Poe received $12.

In the years since it came on the market The Masque of the Red Death has been adapted to audio (LP albums and radio broadcasts), comics and in 1964 a Roger Corman motion picture staring Vincent Price.