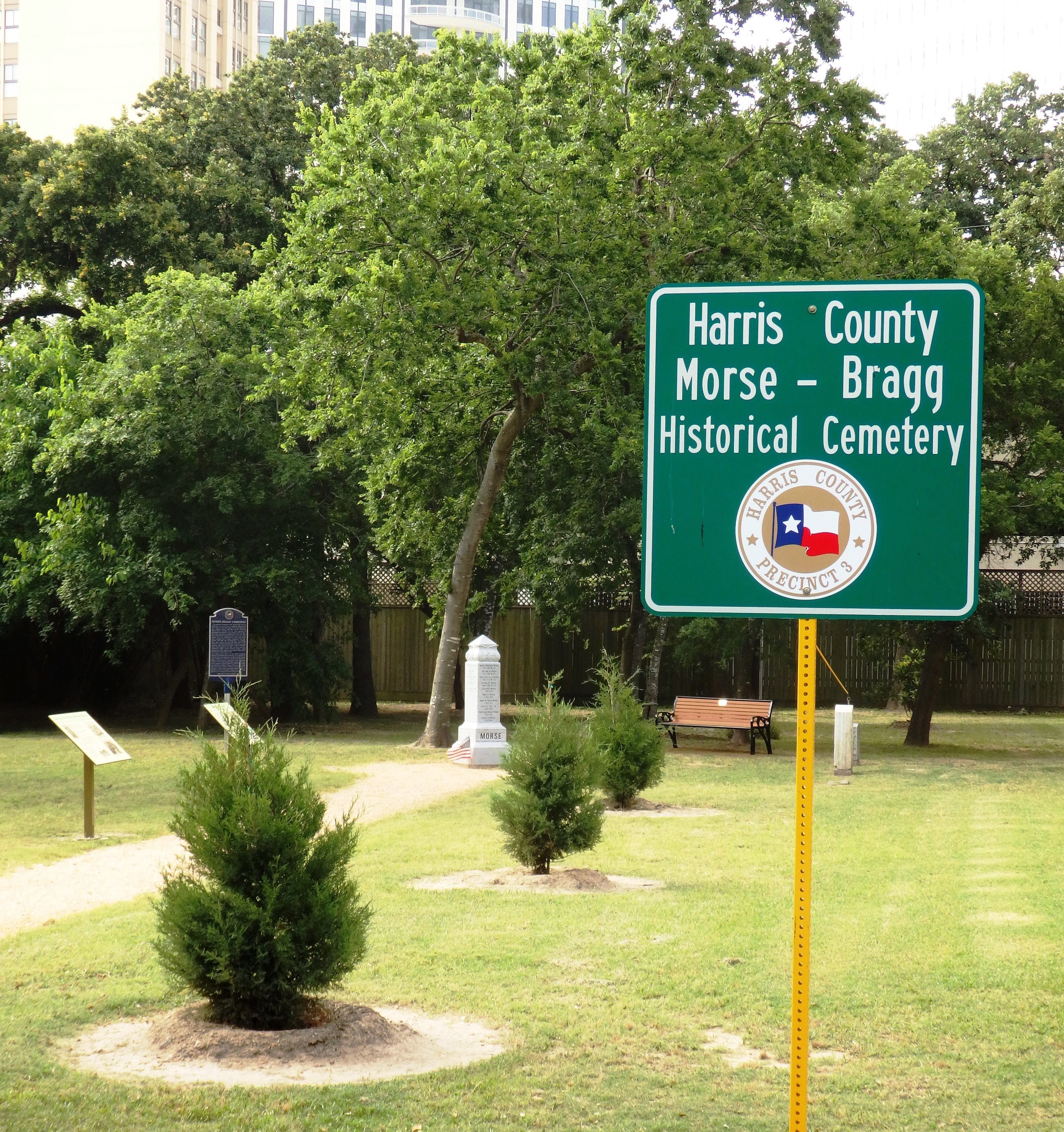 “The bitterest tears shed over graves are for
words unsaid and deeds undone.”
-Harriet Beecher Stowe

This tiny pioneer cemetery is located in the shadows of skyscrapers and townhouses between S. Post Oak and Post Oak Boulevard.  Settlement of this area began in 1830 along the wagon trail from here to Stephen F. Austin’s colony village of San Felipe about 50 miles to the west.  The trail was located about where San Felipe Road is today.

Connecticut Yankee Agur Morse (1801-1865) and his wife Grace (1814-1890) moved to Texas and established Pleasant Bend plantation in 1851 near where the burial ground is today.  Their residence was about 200 feet south of what remains of the cemetery today. A sawmill, cotton gin and grist mill were located where the Omni Hotel stands today, about 150 yards north. Over the years the Morse’s acquired most of the acreage that is now River Oaks, West University and Tanglewood.  John Kell Morse, Agur’s brother, a Methodist preacher and his wife, Caroline Jones Morse, moved nearby prior to the War Between the States. 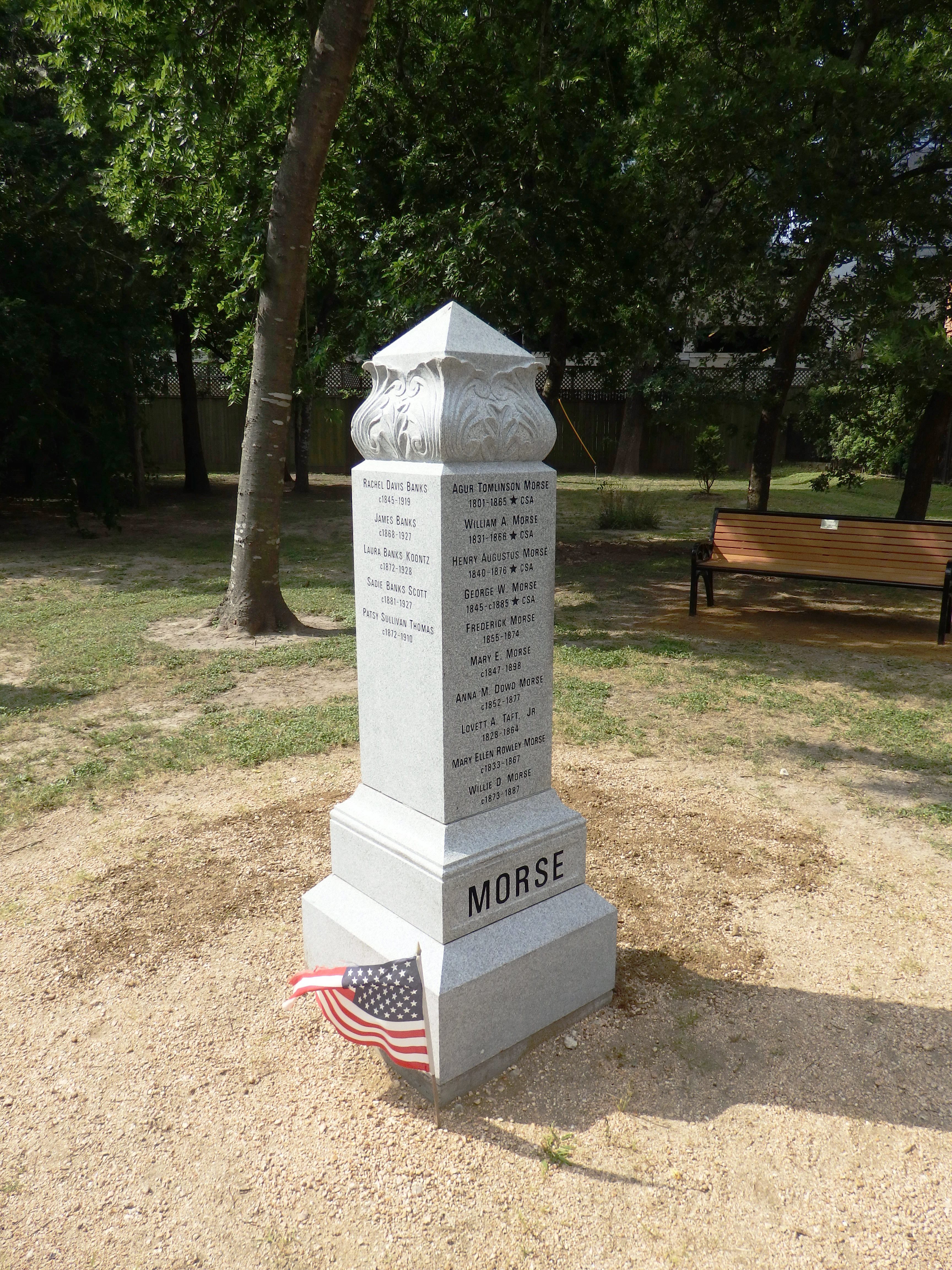 This was a family cemetery from about 1851.  In 1874 Grace established the burial ground with a formal deed.  Persons who were interred here include veterans of the conflict of 1861-5 as well as former slaves named Banks who had lived on plantations in the area.  Records indicate about 34 burials took place here between 1857 and 1928 although there were most likely other graves on the property.

Unfortunately, over the years markers were stolen or vandalized and only two of the original tombstones are still standing. Those stones were protected by neighbors for safe-keeping.  Marks’ parents had a home in nearby Tanglewood. When he was boy in the 1940s and 50s, a classmate’s home was directly across the street.  At that time about 10 to 15 tombstones were still there.

After decades of uncertainty as to the final fate of Morse-Bragg Cemetery, the property was finally taken under the wing of Harris County, assuring its future as an important historical site.  On May 12, 2017 a dedication ceremony was held.  In attendance were descendants of persons interred here, County Judge Ed Emmett, Commissioner Steve Radack, Councilman Mike Knox and Debra Blacklock-Sloan of the Harris County Historical Commission.

The effort to save Morse-Bragg took four years of hard, dedicated work by descendants, historians and civic leaders. Pleasant Bend: Upper Buffalo Bayou and the San Felipe Trail in the Nineteenth Century by Dan M. Worrall as well as this website: www.pleasantbend.com document in greater detail the cemetery, plantation and its historical significance to the region.

Banks, Rachel Davis (c 1845-1919) and three children – Emancipated slave —  Originally from Louisiana, Rachel was a domestic servant who had between 15 and 19 children.  She died of pneumonia.

Bell, Thaddeus Constantine – (1822-1871) – Farmer and Prison Administrator — He was one of Stephan F. Austin’s “Old 300” and the first male child born in Austin’s colony.  A Confederate veteran, Bell was a farmer and Superintendent of Texas Prisons.

Bering, Louis – (1843-1891) – Merchant — An archeological dig on the property turned up a wooden casket with a broken viewing glass and the remains of a large male that was identified as Bering.  This “viewing glass” coffin was very popular in the 1890s.  Bering was a Confederate veteran and owner of a hardware store.  Near him is the grave of Eugenia Morse Bering, his wife (1843-1866.)  Two other caskets were unearthed nearby but the remains were unidentifiable.

Bachelder, Emma Frazer – (c 1852-1871) – Young Woman — She was Grace Morse’s (see below) niece and a member of the Houston First Presbyterian Church.

Bragg, Benjamin A. – (1818-1886) – Pioneer settler — A native of Vermont, his wife was Mary (see below). Benjamin was a co-founder of the Morse-Bragg Cemetery and purchased the southern part of cemetery (1/3 of an acre) from Grace Morse. 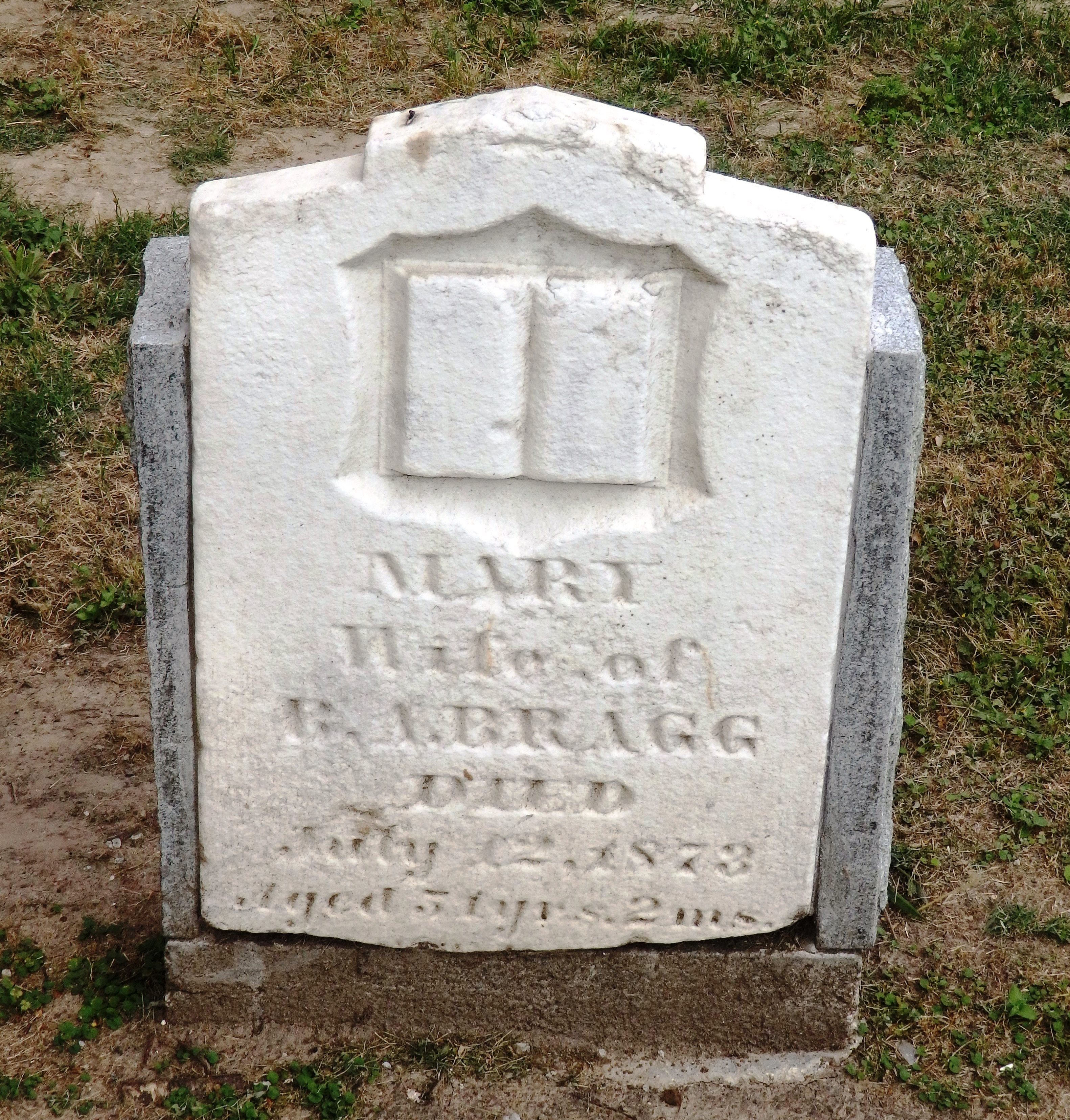 Bragg, Mary – (1822 -1873) Pioneer settler – A native of Vermont she was the wife of Benjamin Bragg.  Mary’s tombstone was one of those saved by neighbors.

Keeling, William H. – (?-1862) Teacher – He taught school at Pleasant Bend (the name of the Morse’s plantation) and kept a diary about plantation life. 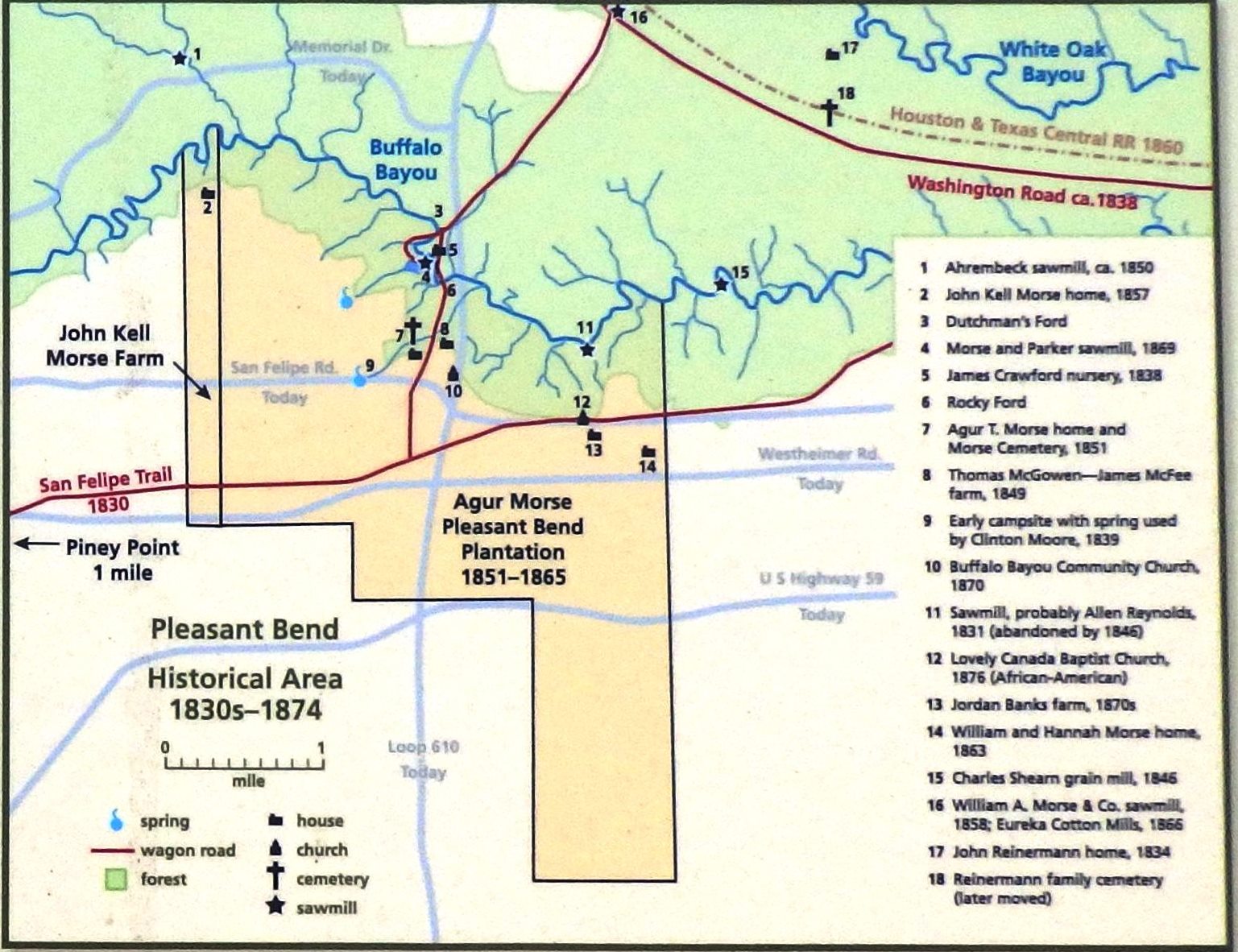 Morse, Agur Tomlinson – (1801-1865) – Early Houston settler and leader — He was an early pioneer and plantation owner who arrived here, along with his wife Grace, in about 1851.  They built a home about 200 feet south of where the cemetery is located.  They named their plantation Pleasant Bend.  Eventually, their plantation spread over nearly eight square miles of what is now urban near-west Houston. The Morse’s owned timber and cotton fields. Mr. Morse was an early leader in growing cotton in the Houston area. Most production at that time was restricted to the richer and wetter bottom lands of the Brazos and Colorado rivers.  Within five years of establishing their plantation, they had added a cotton gin and grist mill as well as a school.  Morse was commander (at the age of 60) of the City of Houston’s Guard during the War Between the States (1861-5.)  He died during a typhoid fever epidemic.

Morse, Henry Augustus – (1840-1876) Businessman — He was the younger son of Agur Morse.  Henry served in the Confederate Army during the War.  Later he was one of the operators of the plantation’s sawmill.  Henry and his wife Cecelia kept a diary about life at Pleasant Bend during the War Between the States.  They had one son who died in infancy (1861.)  Henry died of typhoid fever.

Morse, Grace B. – (1814-1890) – Pioneer Settler –She was the wife of Agur Morse (see above.)  Following the War Between the States and Agur’s death, Grace fell on hard times. Her money was in worthless Confederate dollars, plantation workers were unavailable and her friends in city and county government were replaced by Federal troops and new officials. Eventually she was forced to sell Pleasant Bend. She was able to save the small area that was the burial ground.

Morse, John Kell – (1808-1863) – Methodist Minister — He was a Methodist reverend and brother of Agur Morse.  He and his wife, Caroline, conducted services on the plantation.  John died of consumption. 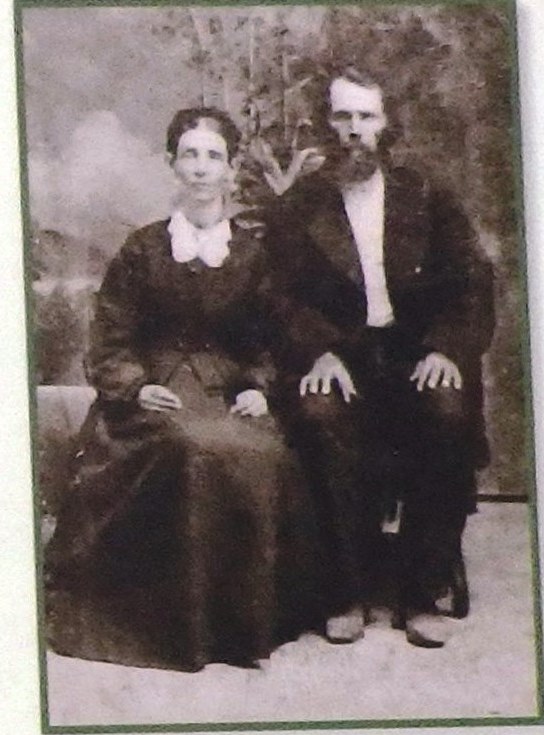 McFee, Hugh Cecil – (1855-1887) Early Settler – He was the son of James and Cassandra McFee who died from an accidental gun shot.

McFee, James – (1814-1903) – Farmer, Carpenter & Cabinet Maker — He arrived in Texas around 1850 from Delaware.  James was a carriage maker, carpenter and farmer.  Like many of his male relatives he was a Confederate veteran.

Scott, Sadie Banks – (c 1881-1927) – Household Worker — She was daughter of Jordan and Rachel Banks (see above).  Sadie was a domestic servant who died of apoplexy (stroke). 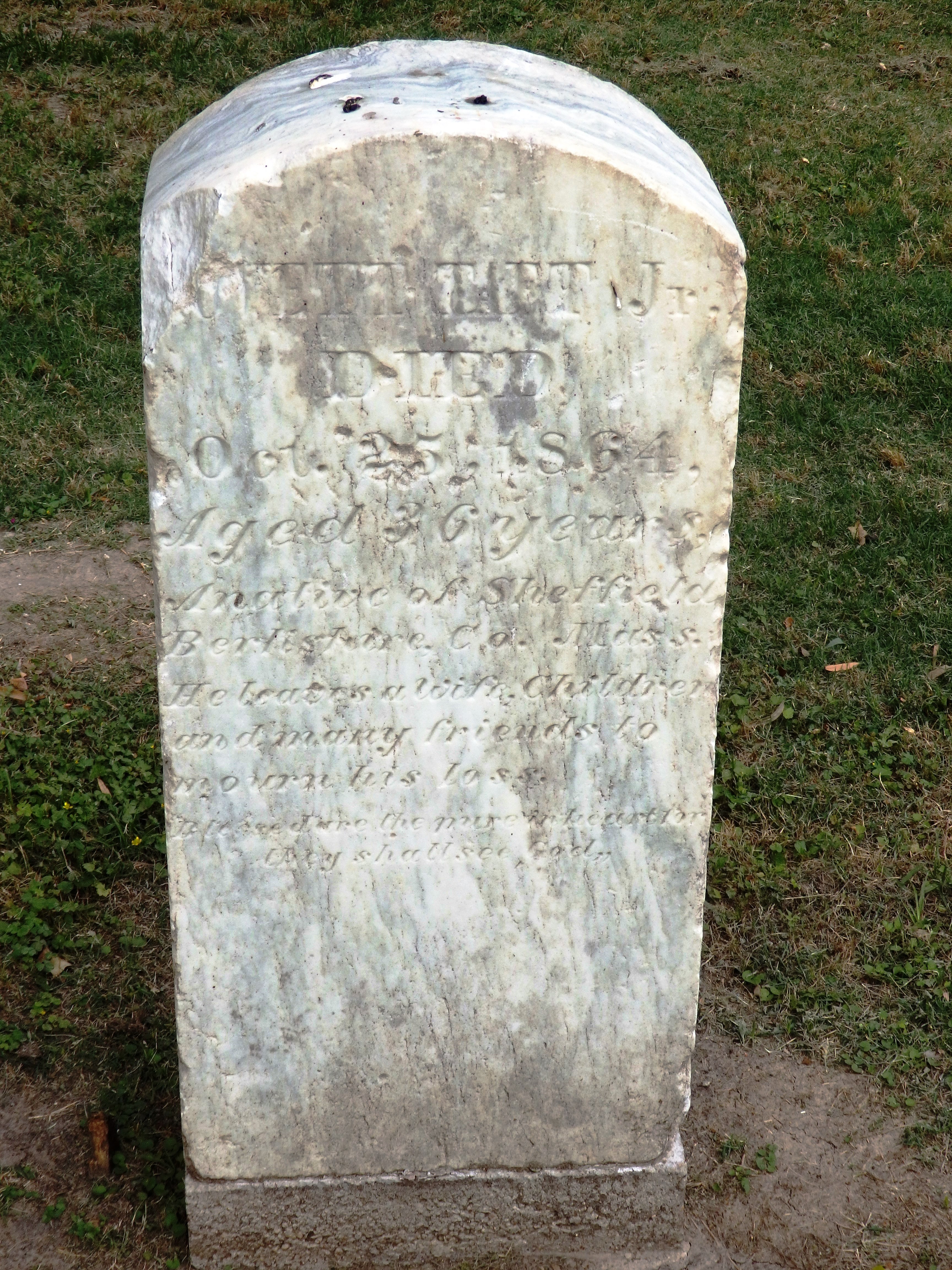 Taft, Lovett A. Jr. (c 1828 – 1864) Entrepreneur – A Massachusetts native, he was the first cousin of U. S. President William H. Taft and co-owner of Houston’s first bookstore. Taft married Agur Morse’s daughter, Elizabeth (1838-1920.)  They had several children.  Taft died of yellow fever.  His tombstone was one that was saved by neighbors in the 1990s.